Writing something in response to things I perceived, sometimes, is my kind of itch to scratch.

The said itch emerged this morning when I found this picture below. It was shared by a friend from a Facebook page of a parody version of Rizieq Shihab, the founder of a hardliner organisation The Islamic Defenders Front (FPI). 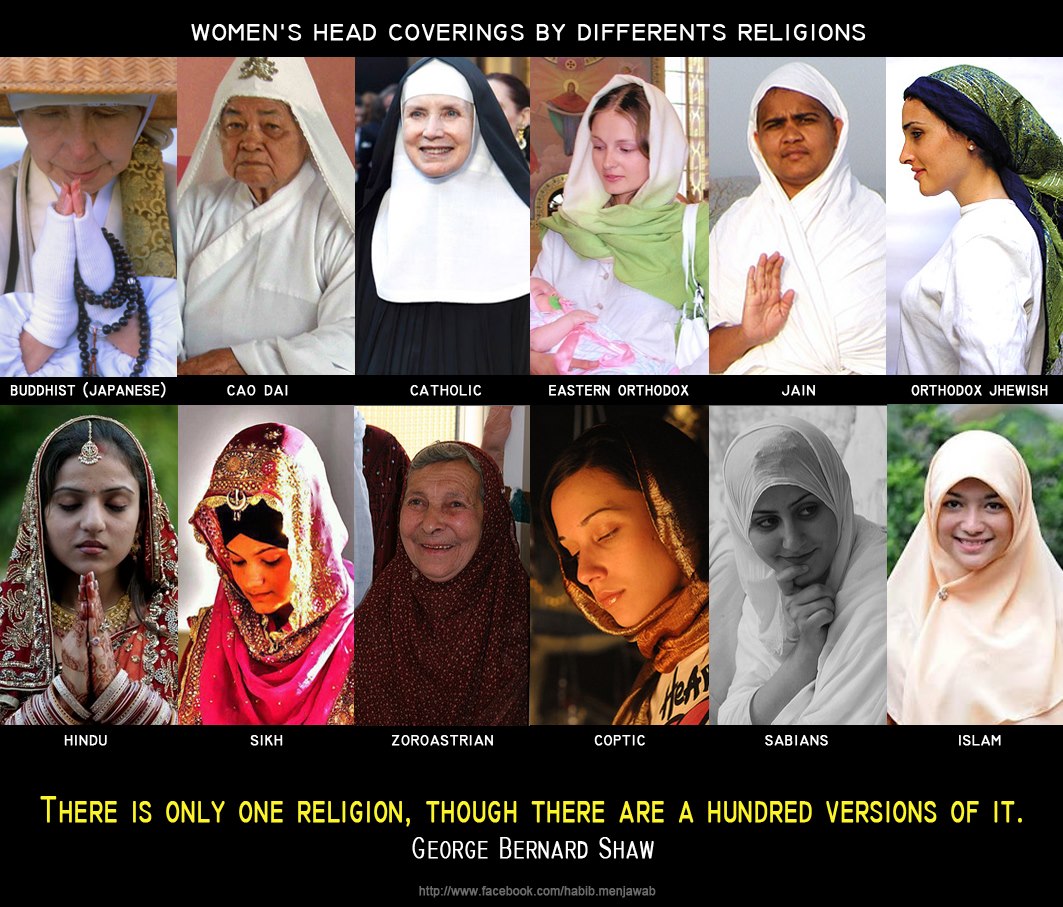 Tickled by how the picture being so hilariously thought-provoking, I decided to share the picture onto my Facebook timeline. Apparently, not long afterwards, a Facebook friend (should I start using this term interchangeably with the word "acquaintance", by the way?), that happens to be a former high school classmate I haven't talk to for years, could not resist the temptation to comment on my post.

Being both puzzled and appalled as I could be after reading his statement, I needed to take my time in giving appropriate reaction. I did consider possible responses, varying from writing an elaborated criticism to deleting the comment (or maybe letting it as is, you know, for I believe in Voltaire's words that says, "I do not agree with what you have to say, but I'll defend to the death your right to say it"). 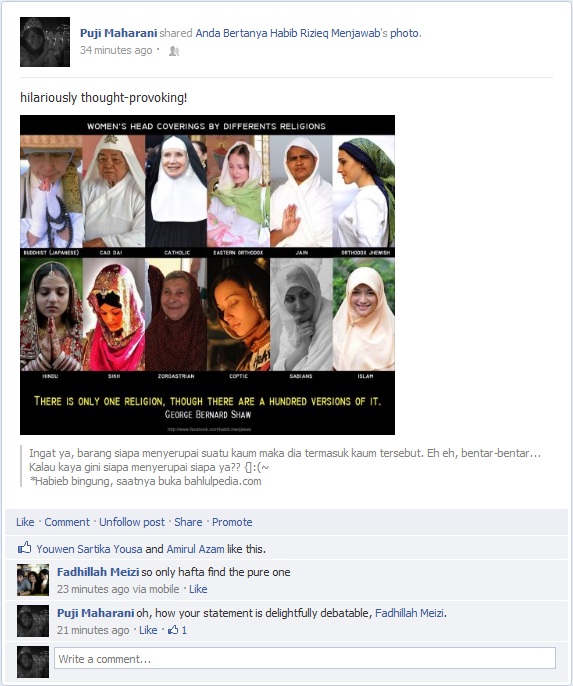 One might be tired of hearing that "nothing in this world is either right or wrong", or "the only certain thing in this world is change". However, let me simplify this piece of thought a little bit by scooping it to the word "pure", that becomes the itch to scratch today. What is it anyway?

1 not mixed or adulterated with any other substance or material
2 (of a sound) perfectly in tune and with a clear tone
3 wholesome and untainted by immorality, especially that of a sexual nature
4 (of a subject of study) dealing with abstract concepts and not practical application

Look, how the word implies such cleanliness and innocence, to regard something flawlessly genuine. Oh, and how I have overdone this adjective by explaining it through even more adjectives, arguably not making things any clearer.


Adjectives, my lecturer once said, should not be used when one is attempting to be as objective as they can, for they are prone to be interfered by individual values and therefore interpretations may vary. For journalists, he continued, such circumstance must be avoided at all cost, because you do not want your audience to perceive the news differently than what has actually happened. Since that day on, his words has become something I live by.

Today, being a journalist no more, I still believe in the minimum use of adjectives, should I attempt to convey my already-subjective thoughts in a fairly understandable manner (although it seems that even now I am using adjectives). Therefore, the usage of word "pure" on the comment above, as I have already highlighted, is something "delightfully debatable."

Oversimplify something as profound (at least for some people) as religion with only one word, "pure", and observe how much one has left out. The word, I believe, does not do justice to religion, which, according to George Bernard Shaw, there is only one but there are a hundred versions of it.

Honestly, how one can even measure a (version of) religion to daringly claim it as "pure"?

Should one believes in a particular version of religion to be pure, how then would they see the other versions of religion? Would they see the believers of other versions as infidels, or the non-believers as people who disrespect divine teachings, and see themselves being purified by believing in "something pure"? When they interact with people who believe in the different versions of religion, are they secretly thinking that "what you believe in is not the right thing to believe because it is, according to my belief, is not pure", and considering to make the effort to convert them to some extent?

I am not writing to discuss the importance of believing in any particular version of the religion, nor to claim which one is "pure". I just found it amazing, in the most unfavourable sense possible, that some people today still choose to believe that they are right and others are wrong, without even slightly trying to understand the perspectives on the opposite side, let alone questioning the belief that most of them have embraced blindly.

I think I also should address another thing: when one tries to "find the pure one" among a hundred versions of religion, what would they do? Would they thoroughly study all, or most, or some of them first before eventually choose one? Or would they believe in something just because their parents and ancestors did that in the first place? If it is the latter, do they dig deep to get more understanding on what they supposed to believe in because it is supposed to be pure; or just take it as is, also because it is supposed to be pure, and hence it should not be questioned?

I believe I must say this: No matter how "pure" something might be, it is all a matter of interpretations and how it is being applied, then it can retain its "purity". However, whether or not something, including religion, is still pure when it is used as a justification to violate others, this I would leave up to you.
Posted by puji maharani at 11:29 am
Email ThisBlogThis!Share to TwitterShare to FacebookShare to Pinterest
Labels: thoughts

Welcome! You Are Number

puji maharani
a wordsmith who ponders a lot, yet write (for her own pleasure) a lot less, hence this blog.